“Ford v Ferrari” – In what is sure to be one of the best movies of the year, Christian Bale and Matt Damon recreate the face-off between Ford Motor Company and Ferrari at the 24 Hour of LeMans in 1966.  Everything about the movie is top-notch, including the performances, the cinematography, and the music by Marco Beltrami and Buck Sanders.  Besides that, it’s a true story of legendary racer and sports car designer Carroll Shelby and ace driver Ken Miles. Originally titled “Go Like Hell” with rumors of Brad Pitt or Tom Cruise to star, the casting is great and it’s a truly entertaining film. (Releases Nov. 15th) 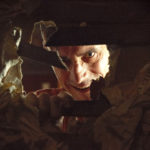 “Girl on the Third Floor” – Producer-turned-Director Travis Stevens shepherds a Chicago cast through a haunted house in Frankfurt, Illinois on the outskirts of the windy city. Queensbury Productions cast WWE fighter C.M. Punk (Don Koch as Phil Brooks) as the expectant father fixing up the house so that he and his pregnant wife can move to the burbs. The house has a different agenda for the couple, who are trying to rebuild their lives together after the tattooed husband ripped off the retirement funds of his clients in the investment business (and cheated on the Mrs.). Two months of shooting produced electrical outlets that ooze, gallons of gushing blood, marbles that mysteriously roll about on their own and a totally chill German Shepherd called Cooper in the film. In real life, Ryker, the German Shepherd, died before the film was released, which is too bad, because he was the best thing in it. Able support from Travis Delgado as black friend Milo Stone and music by Steve Albini. (Streaming on October 25th and in select theaters.).