Obama's Odyssey: The 2008 Race for the White House

Because the Quad Cities, where Connie and her family live most of the year, is on the Iowa border with Davenport and is the first caucus state in the nation, Presidential political candidates flood the area during election years and Connie started writing about them for Associated Content way back during the Howard Dean campaign year of 2004 (for www.BlogforIowa.com) 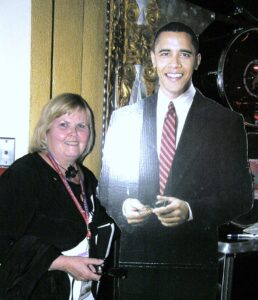 Connie began writing about politics for Associated Content, which paid you per “hit,” and she stirred up a firestorm of controversy by predicting that Obama would carry Iowa (which he did). Soon, Yahoo bought out Associated Content and came calling, asking her to fly to Denver and cover the DNC (Democratic National Convention) and the RNC (Republican National Convention) held that year in St. Paul, Minnesota. This led to an adventure trekking about Denver and turning in pieces for Yahoo that earned her the designation Yahoo Content Producer of the Year for Politics in 2009. According to PRweb, Obama’s Odyssey: The 2008 Race for the White House (Vols. I & II) is history served up with a smile and If you are a Progressive, Independent or simply a Democrat with a sense of humor, pick up Volumes I and II of the new two-book set Obama’s Odyssey. The books came from Connie’s coverage of the 2008 campaign and the 1,000 published articles on Yahoo, which garnered 3 million hits and won her the award Yahoo Content Producer of the Year for Politics. In addition to covering 2004 and 2012 campaigns, Connie was inside the conventions in Denver, St. Paul, the Belmont Town Hall Meeting in Nashville, the Ron Paul Rally for America in Minneapolis, the Rudy Giuiliani campaign in Florida and the Nevada caucuses. The 2 volumes contain 88 historic photos and many funny behind-the-scenes stories. 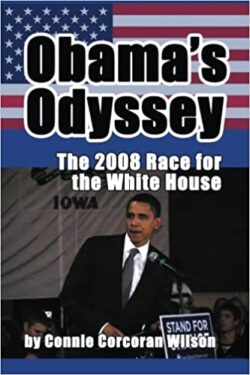 Vol. I: Caucus to Convention

The first book recounts Connie’s adventures in 2008 covering the presidential race inside and on the road, with many photographs and many insights for the race of 2016.

The two volumes of Obama’s Odyssey: The 2008 Race for the White House contain a total of 88 historic photos and 95 short Yahoo blog articles, which were “hit” over 3 million times as author Connie (Corcoran) Wilson followed the candidates around the country, reporting on the Iowa caucus, the DNC and RNC, the Belmont Town Hall Meeting, the Nevada Caucuses, the Florida campaign of Rudy Giuiliani and the historic night in Grant Park after the Pennsylvania Primary, with Connie and other journalists across the country blogged “live.” She was one of only 125 bloggers issued press credentials to be inside the Pepsi Center in Denver for the Democratic National Convention and the Excel Center in St. Paul for the Republican National Convention.

Volume 2 continues and completes President Obama’s journey to the White House. The two volumes are remarkable because they are the truthful account of an ordinary citizen (and Iowa native) reporting on the mood of the rallies and the opinions of the average voters. [Connie was named Yahoo Content Producer of the Year for Politics in January, 2009.] Her 1,000 Yahoo articles were “hit” over 3 million times. The second book has more pictures and more humor, but each is a small slice of history.
Learn More

Watch Obama and Bernie Sanders dolls talk about Obama’s Odyssey. The books were both also featured on Author Showcase, a late-night talk show in Chicago that is also streamed live on Apple ITunes. Although Connie still occasionally writes about politics on her blog Weekly Wilson, her feeling with the current occupant of the White House is that she’d be safer and happier covering movies, so her focus has shifted slightly, although you may still find her commenting on the current sad state of affairs (and she means that last word literally).
Previous
Next