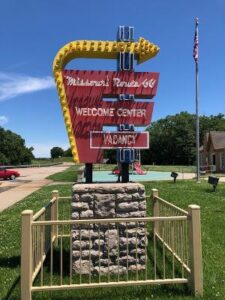 Route 66 Rest Stop on the way through Oklahoma from Texas to Illinois.

We recently drove from Austin, Texas, to the Quad Cities, through Oklahoma, Missouri, and Chicago.

The entire landscape seemed dystopian and surreal. Nothing was open except large food chains like Wendy’s, Taco Belle, and McDonald’s, which had lines snaking through the drive-throughs, but signs on the doors saying, “No dining inside. Curb pick-up only.”

Rest stops along the way often had chains around their vending machines with the message “No Vending” posted.

The one pictured in this article had a message within the women’s rest room that said, “The streaks on the inside of the glass are from the disinfectant for coronavirus.”

And this is America by road today, in the year of our Lord 2020.

We spent one night in a small town near Springfield, Missouri. The “free” morning buffets have been abandoned and the Best Western—-which had only one bar of soap in the bathroom, and whose sink was not inside the tub/toilet room—looked like something you’d stop at in an impoverished country, There were only 2 motels in this small town and it had taken us so long to get through dallas (traffic accident) that we couldn’t make it to the bigger town of Springfield, so our choice of motels was a grand total of 2, both of them hard to get to.

When we got to St. Louis, we stayed at my brother-in-law’s house, who recently lost his wife (April 18) and on late-night television the demonstrations began in towns like Ferguson. I watched a clumsy Anti-Fa black-clad member try repeatedly to light a Molotov cocktail to throw through the window of a nice-looking brick pizza place (Luciani’s). A black resident of the city lumbered over and told him to “take that shit elsewhere.” After he tried (and failed) to be able to light the wick, again, he did, finally give up. 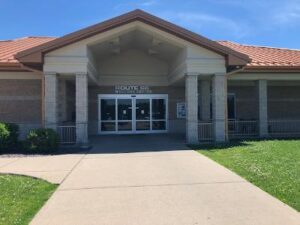 By the time we got to Chicago the streets were impassable. Police at each intersection kept us from being able to drive to my downtown condo, where my car had been parked for 5 months. I had to show the cop my driver’s license to be allowed to drive to Indiana Avenue.

When we finally reached the Quad Cities we learned that:

The post SPIKE “At the Mike” O’DELL TO GUEST on 6/11 appeared first on Weekly Wilson – Blog of Author Connie C. Wilson.