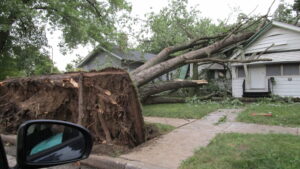 The house next door. The family were sitting in their family room (boarded up) when the tree fell between their house and the next door house. 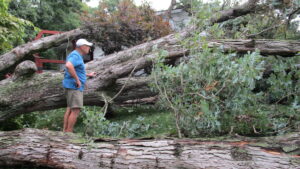 A storm stretching 777 miles, with a diameter of 140 miles hit the Quad Cities and much of the rest of the state(s) of Iowa, Illinois an Nebrasks (among others) cut a wide swath of destruction and downed power lines.

I was on the phone at roughly 2 p.m. when the wind began throwing branches against the windows and roof. We’ve lived in the house since 1970 and been through many tornado-like episodes, but this one was the worst. 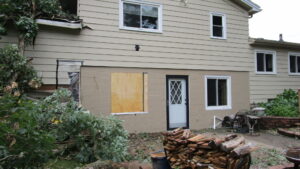 The house next door.

head into the right end of our dumb-bell shaped court. All our power was out until late Tuesday night, and this condition was quite universal, with 180,000 or so with no power in Cedar Rapids and about 75,000 each in Des Moines and the Quad Cities. The Internet was also wiped out by the storm.

I’ve canceled my Thursday night podcast and re-scheduled author Jon Land for Thursday, August 20th, when we will talk about his newest book, “Strong from the Heart,” the eleventh entry in the Caitlin Strong series about a female Texas Ranger. John has written over 43 novels, and I’ve read and reviewed three of them. This is the best one yet, and I’m sure it will be a good program, “live,” on THursday, August 20th. 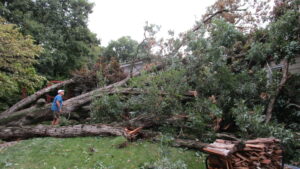 But returning to the storm and its consequences. 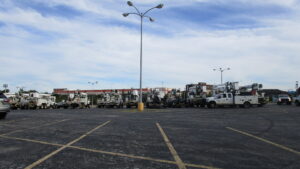 Electrical trucks from several states gathered in the old Hobby Lobby parking lot in Davenport, to assist in restoring power to the region after the storm.

In Cedar Rapids, a curfew was imposed. The city was dark and it was almost impossible to purchase gas. (Here, it was food).

My sister’s house in Marion supposedly lost at least 10 old trees from near her and, as he drove home, my nephew reported that his building at an architectural firm had been evacuated after the outer shingling began peeling off and blowing away, plus, there was a gas leak.

I’ve been through one tornado (too young to remember it), where we crouched in a storm shelter as the roof from the nearby St. John’s Church was ripped off and much of it was partially dropped in my back yard. (My father built me a playhouse with the wood.) I’ve been through blizzards and floods, but this “hurricane on land” was quite unique. 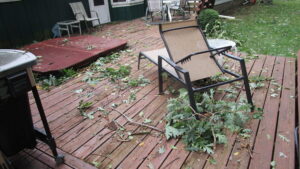 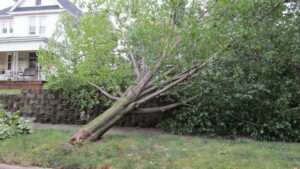 It doesn’t help at all to have read in my Iowa newsletter that the original definition of a decheco was described by an Iowa alum in the 19th century.

So, a pandemic, Murder Hornets, weird packets of seeds from China, Donald J. Trump and, now, the decheco storm of all storms. I read that this was much like a hurricane on land but that the name of the phenomenon comes from the fact that it goes directly through the area. Counties in Iowa were declared disaster areas and roughly 1/3 of the corn crop may have been lost to the storm.