Earlier in the festivities I did a review of a wonderful new documentary called “The Bluebird,” which is a visit to the Bluebird Cafe in Nashville, Tennessee, which is (apparently) the subject of a television show starring Connie Britton. (I’ve never watched it).

I attended the Bluebird documentary, however, taking many pictures of the director and others on the stage of the Paramount in Austin, Texas, at SXSW on Thursday, March 14th at 6:30 p.m. (It showed again at the Lamar at 11:00 p.m. on Friday, March 15th).

Later on, I received a phone text message informing me that the daughter might be singing back-up for one of her singer/songwriter friends who was going to be appearing onstage at the Bluebird Cafe on their Monday songwriters’ night (featured heavily in the documentary). Lest you think this is unimportant, it launched the careers of both Garth Brooks and Taylor Swift and, although the daughter wasn’t certain she would have a role, I look forward to her ringside seat report of her friend’s performance. 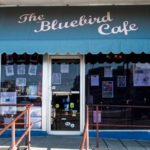 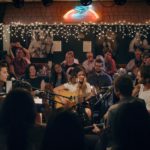 I asked the daughter, who went to school in Nashville and lives there now, to send me a picture of the exterior, but when I went to press, somehow that picture (and a few others she sent) had disappeared, not to be found.

I’m still trying to figure out how to get a small bit of film sent me by the son of Low Cut Connie performing at Lucy’s Fried Chicken in Nashville on Saturday, March 16h, to post on my blog. The file sent me came through as IMG-5643.MOV (5.2 MB) but how does one get THAT to post? In place of it, I shall post the link of Adam Weiner (who is “Low Cut Connie”) appearing on Seth Meyer’s late night show and the 2 pictures of the Bluebird that I now have located.

I am posting the Low Cut Connie link because he and his band will be performing at The Rust Belt in East Moline (IL) on April 18th. I’ve been told that the Rust Belt is somewhere on 7th Street, but look it up and check  it out. (I’ll be in Mexico). I’m hoping that www.QuadCities.com will run a notification when it is closer.

I missed Low Cut Connie when he hit the Raccoon Motel in Davenport, but Craig wanted to be present here in Austin for his birthday celebration with son Scott and daughter Stacey at Lucy’s Fried Chicken. They got to hang with the band afterwards, as one of the guitarists was someone known to the Nashville daughter.

The van at Camp Sandy.

I was covering “Pet Semetary” with stars Jason Clarke, et. al., (that piece has also run previously), so I missed the hilarity (and the chicken) and the music, but I’m doing my best to drum up a record crowd for you, Low Cut Connie (i.e, Adam Weiner) if only because my name IS Connie. The picture to the left represents the van that Low Cut Connie was supposed to play in at Camp Sandy. INSIDE the van. You sit outside and watch the performances on the screens you see mounted on the exterior of the van.

I’m not thinking this would be optimal for an act that is Jerry Lee Lewis Redux times 100. However, I did drive out to catch him there (since I couldn’t be present at Lucy’s Fried Chicken on Saturday, March 16th). There were problems at Camp Sandy, but the Turtle Wax people have reached out and are sending me vats of Turtle Wax to East Moline. Thanks, Eden Zaslow of Zenogroup! That was not necessary.

Low Cut Connie WAS present on the 16th and, if I can figure out how to post the 5.2MB piece of film sent me by my son, you will be able to see it here some time in the future.