The Ghostly Tales Of Route 66 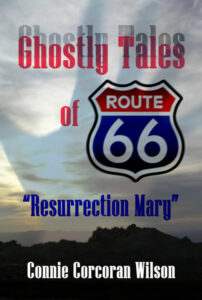 Connie and her husband drove from Chicago to Santa Monica gathering these tales of terror and attended a 4-hour ghost tour of Fort El Reno, Oklahoma that was put on for them especially, after the season had officially ended in November. Connie later broke out most of the states in e-book format, for those who want to read only about their state ( Texas or Oklahoma, etc.) It is not informative in explaining how the route was doomed when the new Interstate system was put into place. Many Europeans still come specifically to travel Route 66, despite its having fallen from grace and faded from its glory days. We’ll tell you about the e-book only state-by-state offerings in this newsletter. Publisher Bruce Carlson of Quixote Books recently sold his 2 millionth book, many of them ordered by the Route 66 Information stations along the route, each of which Connie personally visited on her journey, which also included a detour down to Roswell, New Mexico, to visit the Museum there.

The stories that Connie and her husband, Craig, collected for the paperback versions of “Ghostly Tales of Route 66” and Quixote Press have all been published in e-book format. If you are traveling and would find taking 3 paperbacks along in your suitcase cumbersome, this e-book copy of the same stories is your answer. The paperbacks are divided and titled differently than the E-book versions.

[Cover art by John Teehan of The Merry Blacksmith Press.] 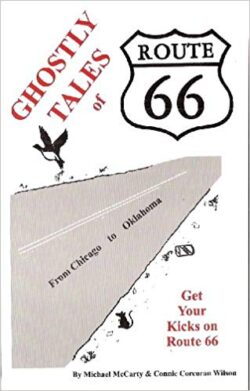 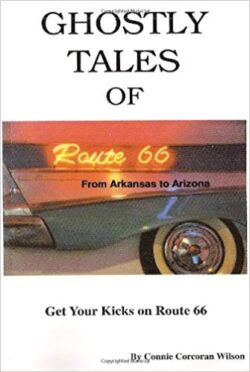 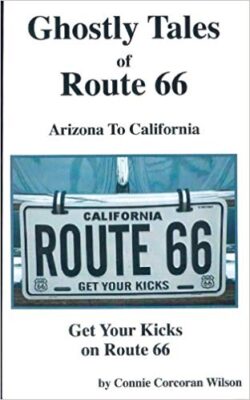 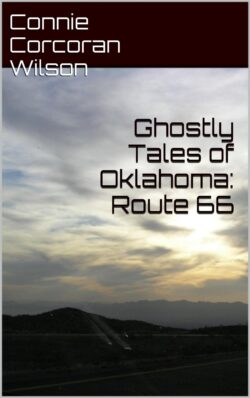 Ghostly Tales of Oklahoma: Route 66 is a compilation of ghost stories told the author in a drive along the Mother Road and is augmented by pictures of the locations visited. It draws heavily from experiences during a Ghost Tour held at Fort El Reno, once a horse-raising capital that provided the Black Jack stallion for JFK’s funeral procession. Amelia Earhart used to fly an auto-gyro (early helicopter) to horse races held there and Will Rogers was another frequent visitor. The site was used as a POW camp for prisoners captured in North Africa who had been Rommel’s Nazi troops. Learn a bit about history and ghosts in this volume. 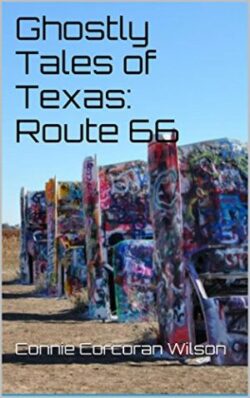 Ghostly Tales of Texas: Route 66 gathers stories and legends of ghost lore from various Texas locations and adds in pictures of the attractions. The cover depicts the Cadillac Ranch, along the route in the Texas Panhandle and memorialized in the Disney film “Cars.”

[Cover photo by Connie while on the route.] 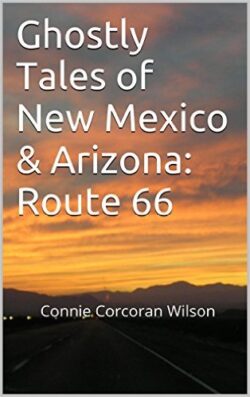 Features ghost stories and pictures gathered while driving Route 66 in the states of New Mexico and Arizona. Stories from Flagstaff, Kingman, Seligman, Oatman, Williams and elsewhere. Four friends travel the route in search of adventure. This book is told more like a fictional story, with dialogue between the four friends who have dared to visit those cities. It is an easy way to absorb the stories without making them seem so much like a travelogue.

For many European visitors each year, Route 66, complete with the iconic television series that followed the adventures of two men traveling Route 66, is a big draw. It is a historic route that was put out of business by Eisenhower’s Interstate system, literally killing many of the towns along the route. But for those who remember the glory days of motels an other landmarks, it will be a fun and informative read.

There’s a Ghostly Tales of Route 66 website with music and information about this historic route. Feel free to peruse it and “get your kicks on Route 66.”