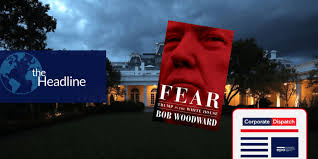 (Image from “The Headline”)

Bob Woodward’s new book “FEAR” came out today, and I am reading it. 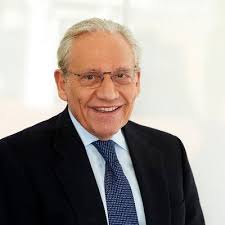 Bob Woodward (Twitter image), co-author of “All the President’s Men” and “Fear”

As with Omarosa’s book about the goings-on inside the White House (“Unhinged”), I will attempt to share with those of you with less idle time on their hands some of its revelations.

Today’s installment will deal only with the first 1% (I ordered it in e-book format), the Prologue. First, let it be known that Woodward had A LOT of help from his research assistant Evelyn M. Duffy, who has worked with him on five previous books. 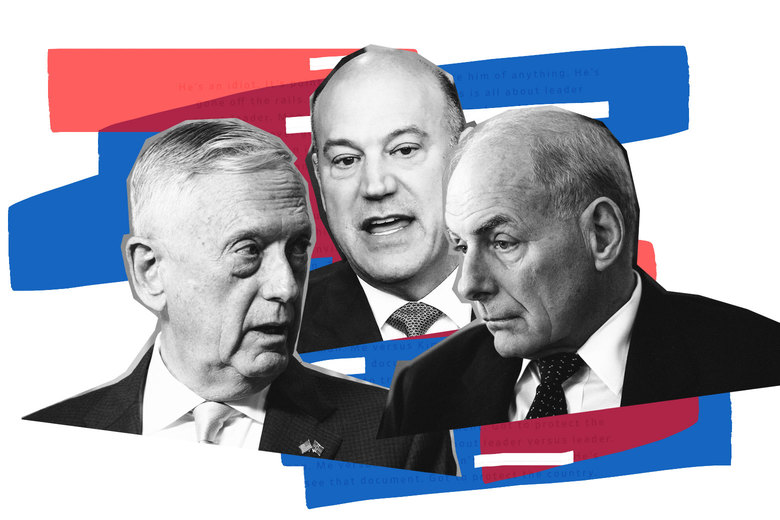 Gary Cohn, the former president of Goldman Sachs and one of the president’s top economic advisers comes off as one of those who is trying to keep Trump from screwing up by signing things he shouldn’t. Cohn, who spent 27 years at Goldman Sachs, is 6′ 3″ and full of self-confidence, notes Woodward. He is also from GOLDMAN SACHS, and, if you remember, Trump made a Big Deal of Hillary Clinton’s speech to Goldman Sachs, but now brings its president on as one of his most trusted advisers. (Go figure).

The Prologue deals with Trump’s unhinged (Omarosa’s book title) efforts to withdraw from the United States-Korea Free Trade Agreement, or KORUS. It isn’t so much that we get economic good from this agreement as that we get the ability to detect any attack that might  be heading towards the U.S. mainland from North Korea because of the work of the military infrastructure present in South Korea, which has been there ever since I was a little girl (the early fifties). The U.S. stationed 28,500 U.S. troops in South Korea and operates the most highly classified and sensitive Special Access Program (SAP) providing sophisticated Top Secret codeword intelligence and military capabilities. 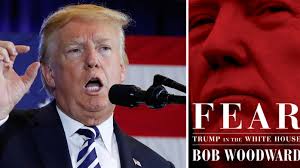 Woodward’s book (“FEAR”) notes that a missile from North Korea would take 38 minutes to reach Los Angeles. Thanks to this treaty and the intelligence apparatus in place there as a result of it, we would know that it was headed for us in 7 seconds. Compare that to the time it would take for Alaska to let us know if an attack from the Russians (15 minutes) and you realize that the ability to detect a lunch “in seven seconds” would give the United States military the time to shoot down a North Korean missile.”

Does Trump recognize that fact?

Apparently not. Woodward notes that it is “Perhaps the most important and most secret operation in the United States government. The American presence in South Korea represents the essence of national security.”

Why, then, did Trump want to withdraw from this important strategic alliance? Because he was angry that the U.S. had an $18 billion annual trade deficit with South Korea, plus our troops there cost us $3.5 billion a year to maintain.

Woodward notes, “Trump was always shifting, rarely fixed, erratic.” Prior to that, Woodward says, “Despite almost daily reports of chaos and discord in the White House, the public did not know how bad the internal situation actually was.” (Or should we say “is”?).

The letter, which Woodward displays on the page, was dated September 5, 2017. It was the trigger to a potential national and international security catastrophe. And Cohn, therefore, removed the letter draft from the Resolute Desk and placed it in a blue folder marked “KEEP.”

Woodward: “In the anarchy and disorder of the White House, and Trump’s mind, the president never noticed the missing letter.” Rob Porter is then noted as contributing to this attempt to stop Trump from doing something stupid. Porter attended Harvard and Harvard Law School and was a Rhodes Scholar, something no one has accused Trump of being.  “Cohn and Porter worked together to derail what they believed were Trump’s most impulsive and dangerous orders.” “Cohn at times would just yank it (an order), and the president would forget about it. But if it was on his desk, he’d sign it.” 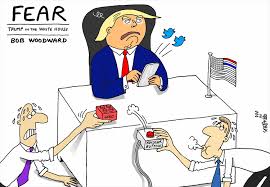 (No copyright infringement is intended & there is no profit from the reprinting of this cartoon image.)

Cohn: “It’s not what we did for the country.  It’s what we saved him (Trump) from doing.” Porter said, “A third of my job was trying to react to some of the really dangerous ideas that he (Trump) had and try to give him reasons to believe that maybe they weren’t such good ideas.” After citing the technique of “slow walking” a bill or order that Trump might unwisely sign, Porter said:  “It felt like we were walking along the edge of the cliff perpetually…It was like you were always walking right there on the edge.”

When confronted with arguments as to why the treaty with South Korea needed to remain in place, Trump said, “I don’t care. I’m tired of these arguments! I don’t want to hear about it any more.  We’re getting out of KORUS.” The cooler heads told son-in-law Jared Kushner that a good draft needed to be prepared and, from there, “Cohn and Porter did not prepare a next draft. So there was nothing to show the president. The issue, for the moment, disappeared in the haze of presidential decision making.”

Concludes Woodward, as the Prologue winds to a halt:  “The reality was that the United States in 2017 was tethered to the words and actions of an emotionally overwrought, mercurial and unpredictable leader…It was a nervous breakdown of the executive power of the most powerful country in the world.”