The Denver Film Festival opened on Halloween (Oct. 31, 2019) with a showing of Rian Johnson’s (“The Last Jedi”) film “Knives Out.” The director was there in person to accept the John Cassavetes Award and discuss the film in a Q&A afterwards with John Wenzel of the Denver “Post.”

The film is a throwback homage to the Agatha Christie-style films that often starred Angela Lansbury…films like “Death on the Nile,” with a tip of the hat to television’s “Columbo.” Johnson admitted as much in Chicago when he said, “I just unabashadly love Agatha Christie.” His goal was to “hide a who-dun-it behind a thriller.” Like many Hitchcock films, the audience is even let in on who the guilty party is mid-film. 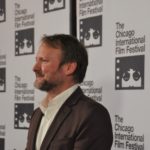 If you’re a fan of “Succession” on television, imagine that the scion of that family (Brian Cox) dies and there is a suspicion that one of his heirs has done him in. That, in a nutshell, is what we have here—murder or suicide?  The opening scene of German Shepherd guard dogs patrolling a house that looks like a haunted “Downton Abbey” owes much to production designAll Categorieser David Crank. (“The guy practically lives in a Clue board.”) The house really is a big part of the film’s plot in many ways.

At first, it appears that the successful thriller novelist head of the Thrombey family (Christopher Plummer as Harlan) has committed suicide by cutting his own throat. The plot, as they say, thickens. An anonymous party hires noted private investigator Benoit Blanc (Daniel Craig) to investigate the death.

Michael Shannon and Director Rian Johnson at the Chicago premiere of “Knives Out.” (Photo by Connie Wilson).

Daniel Craig, who was hired first for the star-studded project, plays the investigator as a cross between Foghorn Leghorn and Hercule Poirot. For me, he was the least effective cast member. After all, audiences had Michael Shannon (the second hire), Don Johnson, Toni Collette, Jamie Lee Curtis, Chris Evans,Jaeden Martell, Frank Oz, M. Emmet Walsh, Lakeith Stanfield, Noah Segas and new-comer Ana de Armas in the pivotal part of the nurse, Marta Cabrera, to share screentime. Some of the cast have little to do, as a result. The true perpetrator of the movie’s mayhem is pretty easy to spot early on, but there are still a few unique twists.

One of the enjoyable and unusual aspects of the who-dun-it plot is that Johnson incorporates a lot of humor. You may have seen the scene where Chris Evans (“Captain America”) enters and says, “CSI? KFC?” Or there is the put-down of “Gravity’s Rainbow,” the 1973 novel by Thomas Pynchon that was nominated for the Pulitzer Prize, (even though the committee found the book’s content to be offensive and it was described as “unreadable, turgid, overwritten and obscene.”) After a mention of the work, a character says, “I’ve never read it.” “Neither have I,” comes the response, “Nobody has.”

Another source of humor is the inability of the Thrombey family to remember what country the nurse, Marta, is from. The attempts to make a point about the immigrant crisis and inequality of income don’t really “work,” but the fact that the characters who claim to feel that Marta is “a member of the family” don’t even know if she is from Ecuador, Uruguay, Brazil or Paraguay is telling. Point made.

Ana de Armas, who plays Marta Cabrera, is central to the plot. Director Rian Johnson said, “I wasn’t really aware of Ana.  Her part was really, really tricky and it’s a lot to step into the middle of a cast like this. It was really critical.” He added, in an interview from the Toronto International Film Festival where he predicted great things ahead for the actress.  The filming began in January, after 4 years of making the Star Wars film, and the shooting was finished by the following Christmas.

The night I saw the film, Johnson was joined by Michael Shannon in Chicago, for Shannon’s very first viewing of the film. He commented that it was “a pretty remarkable cast” and added, “I don’t really think Walt is reprehensible.  He’s just not fully formed.” Shannon described the appeal of the role as “I had never done a movie like this in a genre like this.” It was quite obvious that director and star became close friends during filming, as Shannon draped his jacket over Johnson’s head on the Red Carpet and Johnson joked that, “I want to do a version where Shannon plays every character.” The director also identified Shannon as the second actor to sign on to the project after Daniel Craig, saying, “He was actor bait.  This film has got some real talent!”

The director also gave major props for the humor in the film to Shannon’s improvisational nature, saying, “Basically, all the funniest lines in the movie are ones that Michael just spouted out on the day.”

Chicago actor Michael Shannon greets the crowd at the AMC Theater in Chicago at the premiere of “Knives Out.” (Photo by Connie Wilson)

On a serious note, Michael Shannon was asked about the recent passing of Robert Forster, with whom he worked in 2018’s “What They Had.” He shared that his father, a former DuPaul college professor had recently died, and said, “When they both died, it was rough.” Of Forster, Shannon said, “He was very kind, a very sweet man.  Something that has never happened to me on a set before was that Robert brought all of us—including my wife whom he had never even met—a present.” Seriously (in what was otherwise a light-hearted series of exchanges) Shannon said, “He was a very kind and sweet man and one of the most grateful actors I’ve ever met.  I did two movies with him.  He was a very lovely person, and I’ll miss him very much.”