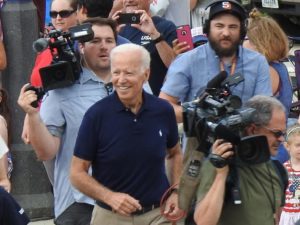 Joe Biden in Independence, Iowa, on the 4th of July.

The New Hampshire primary election results are in, and the political choice between revolution and evolution continues.  I liked Chris Matthews characterization of the race as this: “Americans are looking for a designated driver. They just want someone to safely drive the car so they can say, ‘You got this’ and go do anything else.” (loosely paraphrased) Matthews went on to say that he was afraid that voters had lost confidence in Joe Biden as a good designated driver for our careening country. And so it goes.

Millennials, having officially eclipsed Baby Boomers as the most populous group in the United States, love the messages of Bernie Sanders and Elizabeth Warren and have since 2016. David Axelrod said the candidate race, this year, is a choice between revolution and evolution.

The younger generation, saddled with onerous debt from their college loans and eager to make the 1% pay their fair share of taxes, are tired of living in their parents’ basements because they are unable to find affordable housing. Bernie’s message resonates. (Warren’s did, for a while, until her spat with Bernie onstage.)

When I am told I am too “middle-of-the-road” and that my gut instinct that Bernie Sanders is not the best candidate to successfully head up the Democratic ticket in a national race, I am either shouted down with “OK, Boomer” or told (by a millennial Facebook crowd) that “Joe Biden is just a desiccated corpse looking for a grave to fall into.”

Not only is that maligning Joe Biden, it’s wrong in my own case. (I’m the Silent Generation, I think—although I get them mixed up.)

It’s looking like the “best” ticket to potentially win nationally for Democrats, at this point, might be Bloomberg/Klobuchar, but, again, cries of “OK Boomer” tell me that I know nothing about politics, and Bernie is the revolution that millennials want, with free college and all the rest of it.

As a one-time Berkeley (Ca) college student and activist during CORE and SNCC and the Vietnam War, I’d just like to remind the Millennials celebrating the Sanders surge, that middle-of-the-road Democrats are not the enemy. Nor are we indifferent to the causes that dominate the news cycles now. Here are the lyrics of a Quicksilver Messenger song “What About Me.” (The band formed in 1965, 55 years ago.)

You poisoned my sweet water.
You cut down my green trees.
The food you fed my children
Was the cause of their disease.

My world is slowly fallin’ down
And the air’s not good to breathe.
And those of us who care enough,
We have to do something…….

Your newspapers,
They just put you on.
They never tell you
The whole story.

They just put your
Young ideas down.
I was wonderin’ could this be the end
Of your pride and glory?

I work in your factory.
I study in your schools.
I fill your penitentiaries.
And your military too!

And I feel the future trembling,
As the word is passed around.
“If you stand up for what you do believe,
Be prepared to be shot down.”

And I feel like a stranger
In the land where I was born
And I live like an outlaw.
An’ I’m always on the run…

An I’m always getting busted
And I got to take a stand….
I believe the revolution
Must be mighty close at hand…