I’ve been playing H.Q. Trivia for about 3 years now, and it had become a staple of our evening, with an 8 p.m. show. We played the individual daily games to “level up” and, generally, it was a 15-minute date with trivia. 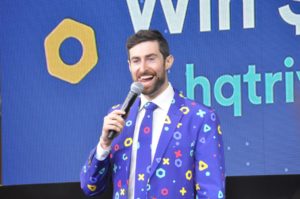 The app fell on hard times with the departure of Quiz Daddy host Scott Rogowski, who asked that he be allowed to host H.Q. part-time and host another sports-themed show on the side. The show declined to allow Rogowski to serve two masters and half of the faithful departed. He was obviously still in high dudgeon at SXSW in April, because I took the pictures of him hosting the first-ever “live” show there, which I attended that year.

There were issues with the leadership of the game show. One of the two founders died unexpectedly of a drug overdose. Peter Thiel was revealed to have been one of the initial investors, which dampened the enthusiasm of other investors. Prizes shrank to low, low amounts—-usually not even more than $1,000—and the very last game on Valentine’s Day caused last host Matt Rogers to give the winner $5 out of his own pocket, while the other winners took home only one cent. 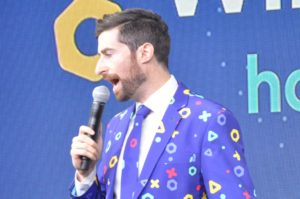 Stand-up comic Matt Rogers did his best to inject enthusiasm into the mix after Rogowsky’s departure, and his co-host for the Words game, Anna Roisman, was competent in her verbal duties, if sometimes annoying in other ways.  Sharon from England did a good job.  (We watched to see if she’d ever fall out of her low-cut dresses.) Tyler the Fish (Tyler Fisher) was fast, and the blonde who handled sports did good work, but a new “add” to the hosting group who hosted a music version on Friday nights was obnoxious and awful. Laina Alaina (probably not spelled correctly) thought she was way too cute and insisted on singing, which was painful for the rest of us. Guest hosts were increasingly infrequent, but they sometimes appeared (Neil Patrick Harris, Jimmy Kimmel) and that kep fans wsatching and playing.

It was rather unexpected that the game was going to tank completely, however. Had I known, I would have “cashed in” the $13 I was owed earlier. (I’m still nursing a bruised ego over the $20 that the Cash Show took down witout paying me). 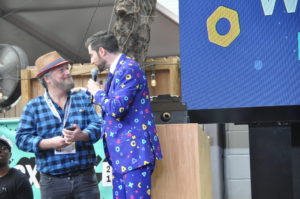 The season had just ended and I had “leveled up” to Level 10 without winning anything more substantial than coins to use for free lives. Nevertheless, the trivia was a welcome diversion and reminiscent of that old game Trivial Pursuit, which I always enjoyed. I am sad to see H.Q. go.

The final night (Valentine’s Day evening) co-hosts Matt Richards (“Money-flipping Matt Richards”) and  co-host Anna Roisman (the poor man’s Sarah Silverman) Matt had just consumed a large meal consisting of crab legs and shrimp and lots of booze. Anna was complaining non-stop about Matt’s belching in their small studio and kept standing on her head, which was never funny. At one point, Matt insisted that he was going to “moon” the cameras, but Anna talked him out of it.

They were both “in their cups,” sad about becoming unemployed. Matt’s dogs eat $200 of dog food monthly, he said; they might starve. Plus there was the jewelry he had purchased (a gold ring with the initial “R”). Bad timing for Matt. Anna kept shilling for her podcast. I understand this impulse, as I’m going to be starting one on February 27th at 7 pm. CDT on the Bold Brave Media Gloal Network.

Indeed, the quiz show originally had about 35 employees, but a petition to get rid of the other co-founder of the game had circulated and, in a Trump-like gesture, that still-living founder fired 20% of the staff. Some, it was said, resigned in protest, claiming the founder was impossible. Meanwhile, veterans of marketing and coding were defecting and the staff that was left was trying to find a way to attract new downloads of the app, which had declined 92% over time. (measured June to June). 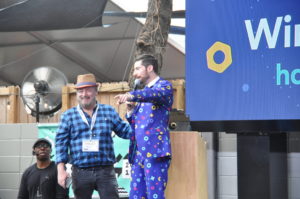 One new game was billed as HQX and involved taking pictures with your IPhone and mailing them in. Bad game.

Then there was Laina Alainna and her non-stop singing and posing during a Friday night music game. Plus, the Words game had truly ridiculous premises, which simply meant that the Tuesday and Thursday night schedule drew fewer and fewer players and the prize money declined to almost nothing.

So, I shall have to fill my time with something else at 8 p.m. each night. Farewell, H.Q.