[Having just finished watching both the DNC and the RNC and doing a “live” podcast discussing both, I am reprinting here the observations of another, Eugene Robinson of the Washington Post.

I’ll ultimately put down my own thoughts about the two conventions, articulated “live” on Weekly Wilson podcast last night in discussion with author Michael Serrapica (author of “Conned Conservatives and Led-On Liberals,” a book about political propaganda), but here is part of Eugene Robinson’s column. Coming from a black citizen, the viewpoints offer more insight than my own :

In his first paragraph, Robinson called out what I  similarly called out in a Letter to the Editor of the Quad City Times published on 8/27, a rebuttal to a Sunday letter  from Lyle Miller that ran on Aug. 23rd. Said Robinson of the RNC show. I call it a DISCONNECT FROM REALITY of those swearing allegiance to DJT.

“What 176,000-plus deaths from COVID-19? What devastating shutdown and recession?  What double-digit unemployment?  What mass uncertainty over whether and how to open our schools?  What shocking police killings of African Americans? What long overdue reckoning with systemic racism?  Let me put it another way:  What country does Vice President Mike Pence live in?” wrote Eugene Robinson.

If you saw my letter to the editor in the paper yesterday in response to Lyle Robinson, I referred to his completely ignoring similar shortcomings and failings of the current administration as “a disconnect with reality.” What is wrong with intelligent people that they cannot see through this charlatan’s charade and how he is playing “the fear card” to try, by any means possible, to hold on to power? It wasn’t a coincidence that Melania Trump showed up looking like a Slovenian Prison Matron the night of her speech in the Rose Garden, the garden that she completely uprooted in order to use “the people’s house” for the Trump team’s purposes.

Robinson continued:  “During his acceptance speech at the Republican National Convention on Wednesday, Pence sounded as though he lived in some kind of fantasyland that perhaps had encountered a few tiny little bumps in the road.  His party has spent the week claiming to represent ‘the common man,’ but Pence spoke as though he knew next to nothing about the daunting challenges that Americans are having to deal with every day.  The most he could muster was an acknowledgement that ‘we’re passing through a time of testing,’ as though he were consoling a motorist after a fender bender.”‘

Pence did offer ‘our prayers’ for victims of Hurricane Laura’ and he acknowledged there had been deaths from the coronavirus pandemic, though not how many.  But his only pointed and specific words were his attacks against the Democratic nominee—‘You won’t be safe in Joe Biden’s America‘—and his full-throated endorsement of President Donald Trump’s ‘law and order’ rhetoric. The idea that “you won’t be safe in Joe Biden’s America” is complete and utter B.S. and any thinking person who was alive from 2008-2016 should be able to figure that out for himself or herself.

At this point, we could add that the violence we are all seeing and  experiencing in towns like Minneapolis and Kenosha is on Trump’s watch, with his apparent tacit endorsement, as it might help him cling to power if he can convince gullible Americans that the violence breaking forth on our streets right now is not on HIS watch, but try to lay it at the feet of a rival candidate who served honorably for 47 years, 8 of them as Vice President.

Robinson continued:  “The vice president rejected the idea of systemic racism, instead focusing on the protest and demanding its end.  He blasted ‘violence and chaos—rioting and looting—tearing down statues”–with no mention of why those things might be happening.”

It is a fair charge to say that DJT cares more about dead Civil War heroes than he does about living flesh-and-blood American citizens.

Continuing:  “Pence spoke from an iconic American setting, the site of the War of 1812 battle whose ‘rocket’s red glare’ and ‘bombs bursting in air’ inspired Francis Scott Key to write ‘The Star-Spangled Banner.’  Fort McHenry is meant to symbolize national unity.  It was an act of defilement to use such a place for partisan political rhetoric intended to provoke division and fear.”

“But as far as this Republican convention is concerned, what else is new?”

“So far, the GOP has misused the White House—the people’s house— to have Trump and his acting Secretary of Homeland Security stage a naturalization ceremony, crassly reducing 5 newly-minted U.S. citizens to photographic props; have Trump pardon an African-American ex-convict Jon Pardon, as part of an all-out attempt to whitewash the administration’s shocking racism; and have First Lady Melania Trump deliver her convention address standing in the Rose Garden she recently renovated.”

We could interject here, “recently ruined.” The Rose Garden trees were planted by Jackie Kennedy in the sixties and the trees bore the names of other first ladies through the years, but they were all gone, dug up to make way for cables and microphones and bland-by-comparison flowers, so that Trump could squeeze 3,000 people into the Rose Garden, nearly all maskless and sitting in close proximity. If there are bigger ways to give the rest of the U.S. the finger, what are they? “Let’s rip out Jackie Kennedy’s garden and, instead, make this hallowed location a launching pad for the propaganda of our convention!” And that’s what 100% of the convention was about: propaganda. Truth rarely reared its head. 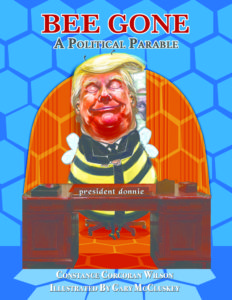 “The party also had Secretary of State Mike Pompeo speak to the convention from Jerusalem, playing an active partisan role in a way no sitting secretary of state has done in living memory (because of the Hatch Act)—in the middle of a taxpayer-funded diplomatic trip, no less. Pompeo is supposed to represent the entire nation, but apparently he represents only the loyal Trump base.”

“Trump and his campaign aides see this ostentatious disregard for hallowed norms (and laws, like the emoluments clause of the Constitution) as elements of ‘the Trump brand.’ Despite being in office for 3 and 1/2 years, Trump still wants to cast himself as some kind of rough-hewn outsider willing to smash all the china, if necessary, to ‘get things done.’ It’s pure razzle-dazzle (or razzle-fizzle) designed to create the illusion of blunt effectiveness and to distract from the administration’s dismal, tragic failures.”

“Pence is supposedly leading the nation’s response to the coronavirus emergency. You would think that he, of all speakers, would at least try to deal with that crisis substantively, but you would have been wrong.”

“As Pence spoke, a potentially catastrophic Category 4 storm was grinding towards landfall along the Gulf Coast—one of two to hit within days.  Thousands of people were trying to evacuate their homes near the Texas-Louisiana border and, because the Trump administration so bungled its response to Covid-19, they had to scramble for shelter and safety in the midst of a raging pandemic.”

“Meanwhile, Kenosha, Wisconsin, was under a tense dusk-to-dawn curfew following angry protests that were sparked by the shocking police shooting Sunday of yet another Black man, Jacob Blake, shot 7 times in the back in front of three little boys while attempting to get into his car. (and now paralyzed from the waist down). Pence apparently hadn’t noticed the reason for the Kenosha protests. And he apparently really didn’t notice the killing Tuesday of two protesters, allegedly by a 17-year-old White Racist vigilante and avid Trump supporter whose mother drove him and his automatic weapon to Kenosha from Illinois. “[The perpetrator, Kyle Rittenhouse, was even able to drive back home to Antioch, Illinois and spend the night in his own bed, while the police chief in Kenosha blamed the victims for “being out after curfew.”] 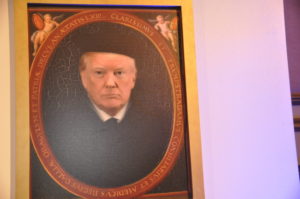 Let’s be quite clear here: all of this completely unacceptable violence is happening on DJT’s watch. The buck stops there.

I’m old enough to remember violence of this magnitude in the sixties, as various civil rights and political icons were shot down and the Black Panthers movement armed to counter police violence towards people of color. Still, the circumstances, amidst a pandemic, with a president who tacitly condones and encourages such unrest, while claiming to be trying to control it, are very different.

Robinson goes on to say: “I wasn’t surprised.  Earlier in the evening the convention brought out Michael McHale, president of the Nattonal Organization of Police Organizations, to describe Biden (who authored the 1994 crime bill) and vice-presidential nominee Kamala Harris (a former prosecutor) as—somehow (unbelievably)—anti-police—and to call DJT ‘the most pro-law-enforcement president we’ve ever had.’”

“What all of this actually reveals is Trump’s own naked fear. (Fear that he may lose because of his incompetence when handling his duties regarding the coronavirus and the subsequent economic downturn.) Even this night, masks were not being worn and social distancing was not being practiced, yet more evidence of this administration’s anti-science bent, which has contributed to the U.S. having 1/4 of the world’s deaths from the virus but only 4% of the world’s population. Trump has made us the leader of “civilized country with most deaths that could have been prevented,” but that was not what the evening’s script wanted you to believe.

Robinson sums up:  “Trump and the Republicans are pulling these stunts because they know that right now they are, according to polls, they are losing this election. Badly. And, deep down, I hope at least some of them realize that defeat is what they rightly deserve.”

Apparently, the Trump team thinks that they can bamboozle their way through inconvenient facts and lie their way to a second term. Be a critical thinker. Look around you. Do you see long lines at food banks? Do you have neighbors who are out of work and whose jobs probably will never return? Worse yet, do you have friends or family members who have caught this lethal disease and are gone forever? Today’s headline of the Quad City Times reads:  “Iowa breaks Covid-19 Daily Records.”

It’s not business as usual, folks, and we are NOT back to “normal.” And whatever “normal” we return to will been shaped by the incompetent response of the very people tasked to address it, who, instead, told us as long ago as January 22nd, “We have it all under control.” Trump  continued to spout this falsehood, even in the face of reality.

Don’t let the GOP disconnect with reality blur your own eyes and ears. Look around and ask yourself that old political question, “Are you better off now than you were 4 years ago?” The answer is clear, and that means change of leadership. Or, actually, getting ANY national leadership in the Covid-19 fight, for a change.