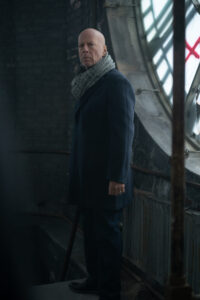 Bruce Willis in “Hard Kill,” 4th film he has shot in Cincinnati in the last 4 and 1/2 years.

“Hard Kill” is a typical Bruce Willis action movie that features lots of shooting and numerous fights. It stars Bruce Willis, although the heavy water is lifted by Good Guy Jesse Metcalfe as Derek Miller, the leader of a brave band of former Special Forces types who are hired to protect Willis and help him get his daughter, Eva (Lala Kent), back from a militaristic terrorist group led by a bad guy  referred to as The Pardoner.

Why is Sergio Rizzuto, who plays The Pardoner, only known by this name throughout?

The answer seems to be to throw a layer of literary gloss over this rough-and-tumble shoot ‘em up, in the hope that it will give gravitas to the message that “Money (greed) is the root of all evil.” That was the Pardoner’s message in Chaucer’s Canterbury Tales.

What are the odds that your reviewer would have been forced to memorize the Prologue to “Canterbury Tales” and RECITE it, complete with Olde English pronunciations yet, when in high school? I’d say the odds were about 5 million to one. But YOU are in luck, because that is exactly what happened to me. So, I am familiar with “Canterbury Tales.” As such, I can tell you that calling Sergio The Pardoner for the entire movie didn’t really add to the movie.

It would have been better had writers Nikolai From and Clayton Haugen focused on the script.

Perhaps the writers should have focused more on the holes in the plot. The worst lapse in critical judgment was having the 5 good guys enter an abandoned warehouse (located in Cincinnati) with very few weapons. Who does that? By way of explanation, the script says: “Posing as civilians is the only way we could get in range.” The script adds: “We’re outmanned. Outgunned. But the fight is still coming whether we like it or not.” (Right. Whatever. “High Noon” this is not). 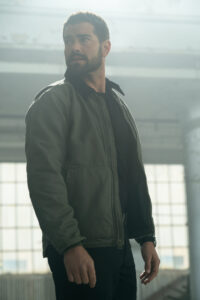 This poor fore-thought and lack of pre-planning means that the quintet has very few weapons and is going up against black-clad heavily-armed troops that look like special forces. There are only so many times you can grab one of the opposition soldiers from behind and twist his neck until it snaps. Here’s another thought: how is the black guy (Nicholas Fox) okay by the end of the film, when he is shot multiple times early on? (Readers want to know.)

One of the hired Willis fighters is purple-haired former professional wrestler Natalie Eva Marie as Sasha. She is a crack shot; her brother is also part of the group. Sasha doesn’t look substantial enough to do multiple neck-twistings of heavily-armed men. [I predict back problems in her future!]

My favorite of the defenders was Swen Temmel, who played Dash Hawkins. Jesse Metcalfe, the hero who does most of the fighting with The Pardoner (Sergio Rizzuto) is probably the best-known of the cast, aside from Willis. Metcalfe played the part of the lawn care professional on “Desperate Housewives” who bedded housewife Eva Longoria. Metcalfe is also in “Chesapeake Shores” on TV, currently, and was in “John Tucker Must Die” (2006).

This is what passes for the plot: Eva is a scientist who has created a weapon roughly the size of a pack of cigarettes in partnership with her father, Bruce Willis. [ Throughout the film, Willis’s character, who mainly sits around, is called Dayton (or perhaps Peyton?) Chalmers, although the IMDB listing says his name is Donovan Chalmers.] The failure to be consistent on a first name for Bruce Willis was the least of the plot problems. The goal of the small band of under-armed heroes is to protect Bruce Willis, get his daughter back, and keep “the code” for triggering the weapon out of the hands of terrorists, lest the world implode or explode or somehow, in some other vague way, be harmed. 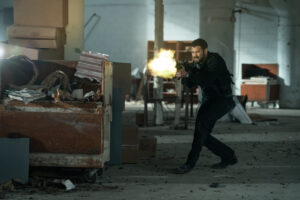 Bruce’s daughter—Eva—takes their invYention and gives it to terrorists because, she says, “I just wanted to test it in the field.” This misstep by Eva leads to the hiring of the A Team of mercenaries, who find themselves racing the clock to stop a world-changing computer program from being triggered.

Of course you’d steal the infamous device you had worked on for years from your wealthy father and stab him in the back by giving it to terrorists. And now you are being held captive in an abandoned warehouse in Cincinnati, so think twice about doing that in the future! (Also, think twice about your wardrobe for traipsing around this old, abandoned, very dirty-looking multi-level warehouse.)

The device is referred to as Project 725 (“So small. So powerful.  This is how we change the world.”) Most of the dialogue goes like that; it could use some rethinking, too.  And some of us would like to know exactly how this gizmo works. That plot point is left very, very vague. However, let’s give praise to Rhyan D’Errico and Mike Burns, who wrangled the music for the film. 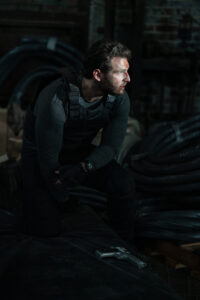 Sergio Rizzuto as The Pardoner in “Hard Kill,” opening 8/25. Tune in to my podcast Weekly Wilson on September 13th (7 p.m. CDT) when we talk with Sergio (relative of Phil) about shooting the movie in Cincinnati.

A side note: some of the Pardoner’s ideas echo those of former GOP strategist Steve Bannon. The recently-arrested-for-fraud Bannon outlined his belief in The Fourth Turning, which means tearing everything down and starting over, in the Errol Morris documentary “American Dharma.”  He and the Pardoner might become best friends, possibly while behind bars?

Since the director of this film is Matt Eskandari perhaps there is a force behind this film that actually wants to make a real statement about stopping terrorists who are undeniably threatening the status quo of world order, via the use of the Willis device in “Hard Kill.

Eskandari immigrated to the United States as a child with his family, following the Iranian revolution. He is an alumnus of the University of Southern California. He has directed several award-winning shorts; including “The Taking” (Screamfest Award for Best Student Short). That film propelled him to nationwide exposure when he was chosen by Steven Spielberg and Mark Burnett from a pool of 12,000 candidates, to participate in the Fox filmmaker competition ‘On the Lot.’

So let’s not blame Director Eskandari when the problem seems to lie more specifically with logic, poor dialogue, and acting by some that is often as clunky as the script. The music by Rhyan D’Errico and music supervisor Mike Burns is a bright spot. The film began shooting in Cincinnati on January 20th, the 4th movie that Willis has shot in Cincinnati in four and one-half years.

Logically, if you are charged with guarding Bruce Willis and helping him get his daughter back, it is probably not a good idea to become pinned down in an old abandoned warehouse, with only 5 nearly unarmed defenders. This hardy group is going to have to fight off teams of heavily-armed terrorists clad in black who resemble the troops that Trump has unleashed in a variety of cities.  There are at least 30 of them, and they have more automatic weapons than the Taliban.

It’s just a bridge too far for me to buy into the logic of this film’s premise.

HARD KILL will be available On Demand and Digital on August 25th.

[*Sergio Rizzuto (The Pardoner) will be with me on my Weekly Wilson podcast “live” on September 13th at 7 p.m. (CDT) on the Bold Brave Media Global Network to talk about filming in Cincinnati. You can call in with your questions at 866-451-1451 from 7 to 8 p.m.]