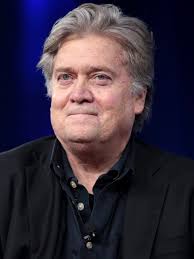 Former top Trump strategist Steve Bannon was arrested for defrauding the public with a “We Build the Wall” Go Fund Me campaign that began in December of 2018 and brought in in excess of $25 million dollars.

Bannon was not really building a wall. He was collecting money from suckers to build a wall. All the while he and his co-defendants were promising that “100% of the money goes to the wall,” which was a complete fiction.

Bannon has been charged, as of today, with wire fraud and money laundering. According to an expert CNN commentator, the authorities have Bannon dead to rights, with e-mails, copies of money transfers that went directly into Bannon’s pockets, etc. His bond is set at $5 million. Of that, he had to pony up $1.75 million in cash or properties, plus a promise not to travel without the permission of the court.

The cynicism of the online “We Build the Wall” campaign cannot be over-emphasized, as these were not wealthy donors but small dollar donations from Americans who were behind Trump’s plan to build a wall between the U.S. and Mexico.

GoFundMe online had some concerns about the campaign. How, exactly, was Kolfage going to give all this money to the government? How would he make sure the government would use it for wall-building?  GoFundMe told Kolfage he needed to find a credible nonprofit organization to accept the money or else it would all be sent back to the donors.

The campaign had grown and there was a lot of money at stake, so Kolfage needed help. Enter Steve Bannon. The former head of Breitbart News, Bannon had been Trump’s campaign CEO in 2016 and served as White House chief adviser in 2017.

The penalty for these crimes can be 20 years in prison, although it is possible that Bannon may have some information useful to federal authorities with which he can bargain for a milder sentence, just like Ghislaine Maxwell (Jeffrey Epstein’s associate). Bannon and Reince Preibus and Kellyanne Conway, backed by Rebekkah Mercer money, were given a great deal of credit for the framing of the issues for the successful 2016 Trump campaign, although Trump and Bannon subsequently had a falling-out, which hinged on conflict between Bannon and son-in-law Jared Kushner.

Bannon, 66, was arrested at 7:30 a.m. on Thursday near Westbook, Connecticut on a $25 million megayacht called Lady May by officers of the USPS. The yacht was owned by exiled Chinese dissident Guo Wengui. “The defendants allegedly engaged in fraud when they misrepresented the true use of donated funds,” Vox magazine said.  “Not only did they lie to donors, they schemed to hide their misappropriation of funds by creating sham invoices and accounts to launder donations and cover up their crimes, showing no regard for the law or the truth.”

According to “Vox:” In December 2018, Brian Kolfage, an Iraq War veteran and triple amputee, came up with an unusual idea. He set up a GoFundMe page asking Trump supporters to contribute money themselves to get the wall built. The campaign pledged that “100% of your donations” would be given to the federal government for the wall. It went massively viral on the right — $20 million in pledges poured in

Steve Bannon, the former head of Breitbart News,  had been Trump’s campaign CEO in 2016 and served as White House chief adviser in 2017. (To learn more about Bannon, see the Netflix  Errol Morris documentary “American Dharma.”)

According to prosecutors, Bannon, through a non-profit under his control, used more than $1 million from We Build the Wall to “secretly” pay Kolfage and cover hundreds of thousands of dollars in Bannon’s personal expenses.

Kolfage, according to the charges, spent more than $350,000 of the donations on personal expenses, including cosmetic surgery, a luxury SUV, a golf cart, payments toward a boat, home renovations, jewelry, personal tax payments and credit card debt.

Bannon is the sixth member of Trump’s “inner circle” to face federal charges and/or go to jail.