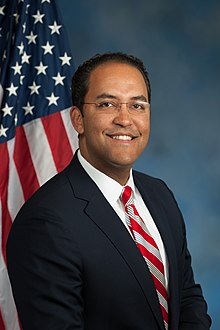 Will Hurd (R,Tx)
Image from Wikipedia
Will Hurd, (R,TX) on “Face the Nation” on February 17, 2019 was asked about the looming show-down over President Trump’s declaration of a national emergency to get funding for his border wall.
Q:  You have 800 miles of the border in your district?  How will the National Emergency Declaration affect your district?
Will Hurd: I’m the only Republican who represents a border town. I spent almost a decade chasing bad guys as an undercover guy (before serving in Congress). I don’t think we needed a National Emergency Declaration. This is a problem that has existed since before Ronald Reagan. What we need to be doing is using a combination of technology and other methods.
DEL RIO BORDER SECTION, EAGLE PASS
Will Hurd: “We just passed a declaration that adds new technology. I was just down in the Del Rio sector of the border in Eagle Pass, and I crossed the border into Mexico. There was unprecedented cooperation with the Mexican government. Most of the caravan members are from Central America. Nine-two percent of the people in the caravan are from Central America, especially Honduras.
INNOVATIVE TOWER INITIATIVE
Will Hurd: We need to address things like border patrol pay. There is a retention problem with border patrol agents. We need additional technology. We just passed something in Congress called the Innovative Tower Initiative, the Smart Wall, which uses technology to figure out what is going on.
Q: How does this concept of the wall and using eminent domain to take land to build Trump’s wall affect Private property in your district?
Will Hurd A; In the great state of Texas we care about a little thing called ownership of private property. Over 1,000 ranchers and farmers would be affected. The government gets to automatically take the land (using eminent domain) and the owner has to go into court to fight to make sure they are getting the bare minimum payment for their land. One. One million acres of arable land is being seized…It’s CRAZY! (with emphasis).
(Hurd sits on House Appropriations)
Will Hurd: “This national emergency declaration. You can’t spend $8 billion in the next 6 months. Can you take funds for military construction…how about in Del Rio, TX, which produces more pilots than anywhere, we’ve been working on fixing additional funds to stop the flooding that keeps us from training pilots. There is
already 654 miles of barrier.The president has already been authorize over 654 million and over 750 million by Home Security. Our government was not designed to exist by national emergency. Our government was designed for the power of the purse to reside in Congress. We shouldn’t have a president, whether Republican or Democratic, who tries to get around it. I would support something that prevents taking money out of military construction for this. They need to make sure that these people are property trained and properly armed. We’re almost in uncharted territory. This is one of the first times that there has been a disagreement It sets a dangerous precedent.
Q: You are saying that the U.S. doesn’t need this wall but will hurt national security?
Will Hurd: “If you’re taking $ away from the military, we just spent the last 4 years rebuilding the military. I don’t want to see that money being taken away from that. We went through a number of hearings and investigations for that money and that is how our government is supposed to operate. 67 billion of drugs are coming into our country and 400,000 people coming in illegally. We need to have operational security. We need manpower and technology. In some places a physical barrier makes sense; we already have 654 miles of fence or barrier.)
Will Hurd: We need a focus on technology, not just one tool (a wall).